He will highlight his successes and failures as he worked through the phases of:

Chris is a VP of Product Management for an oil and gas software firm. He has a background in startups and specializes in growing enterprise software applications in regulated markets like Pharmaceuticals and Oil and Gas. He has been married for 18 years and has four boys. He is energized by putting frameworks in place that help software companies scale and create recurring revenue at high margin. 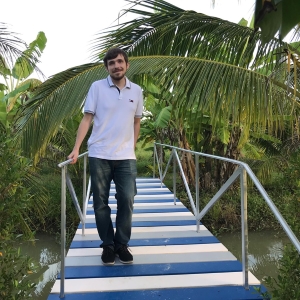 As we are in between multiple holidays, tech support scams from overseas are at their highest. In 2018 alone, people in the USA reported to lose over 55 million dollars to tech support scams. While the local authorities watch helplessly, a new group of vigilantes was born to fight the scammers. They are commonly called scam-baiters. Those individuals have taken the war to the scammers themselves, and through different means (legal and illegal) have successfully disrupted the operation of many criminal call centers.

· Analyze the different methods, tech and software the scammers use to steal, harass and blackmail unsuspecting citizens.

· Follow the money trail to have a first-person view into the dark and unforgiving world of the fake tech-support call centers.

· Learn the different tactics the scam-baiters use to shut down the criminal call centers.

And most importantly, we will raise awareness of the issue, so that potential victims could be prevented in the future!

Dmitriy Shatalov graduated from Texas A&M University with a degree in Mathematics and Physics. He previously worked as a Programmer and Manager at M4C (Texas A&M), Technical Support Representative in Wifi Networks (ViaSat) and High School Teacher. Dmitriy currently works as a Project Coordinator at AdventGX and Technical Advisor at the Fronds in Zanzibar Resort project.